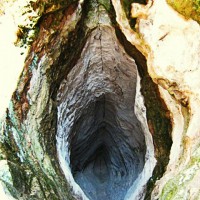 The Womb cave near the village of Padartsi

Location: Situated 25 km from the town of Kardzhali, high in the mountains above the hut Borovitsa in rocky area Dangardak Kaya (The ringing stone).

Description: This incredible facility from the Thracian times was found in April 2001 The place is deserted, and nearby are developing some of the biggest complexes of Thracian rock niches in the Eastern Rhodopes (in villages of Nenkovo and Duzhdovnitsa). The cave is a natural crevice in the rock later shaped by human hands, 22 meters deep into it you get the feeling to penetrate a female womb. On the walls of the womb constantly is flowing water, and in the inner southern end is carved altar, symbolizing the womb. Exactly at noon through intentionally cut slot in the ceiling penetrates a sunbeam, which is projected on the floor. Forms are perfectly shaped solar phallus, which gradually increases and striving towards the altar – uterus. But only during the vernal and autumnal equinox when the sun is low in the north, it may be long enough to fertilize a symbolic womb.

Access: from the town of Kardzhali near lake of Kardzhali and in Borovitsa hut; on the main road Haskovo – Kardzhali you turn right at the traffic police checkpoint near the village of Skalna Glava. At 1800 meters of asphalt road. The best approach is from the hut Borovitsa. About 300 m behind the hut, towards the village Nenkovo near a fountain has a sign which indicates the beginning of marked hiking trail. Until the site is reached in about 1 hour. The trail is steep but with well-formed places for rest, alternating at about 500 m, and at the foot of the cave there is a shelter. The entrance of the cave is reached by wooden ladder.