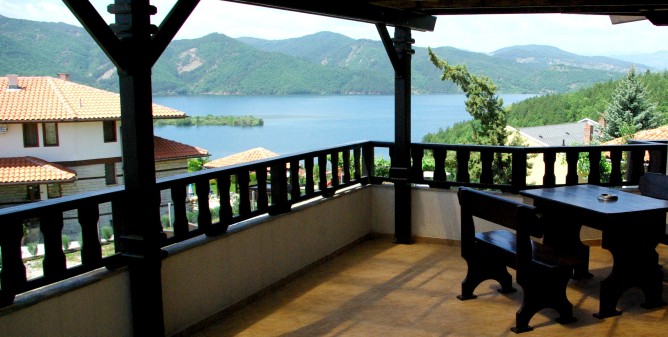 Glavatartsi village is situated in the heart of the Eastern Rhodopes, 368 m altitude, on a hill rising between the two branches of Kardzhali Dam. Located 8 km from the town of Kardzhali, 259 km from Sofia and 54 km from the border with Greece at checkpoint Makaza- Nymfaia.

For thousands of years this Rhodope region was the cradle of different civilizations and cultures. There were villages inhabited by Thracians, Greeks, Romans, Slavs, Bulgars, Byzantines, Latin and Ottoman Turks. Testimony that the place of today’s Glavatartsi settlement life was still several millennia ago, have found two jars in the construction of one of the new houses. They date from the II century BC, when these areas were inhabited by the Thracian tribe Besi.

The oldest known name of the village found in the Glossary of settlements and settlement names in Bulgaria 1879-1987g., Is Emir-oglar. In 1934 by decree of Tsar Boris III all settlements in Bulgaria, carrying Turkish names are renamed and the village is called Glavatari. Later, in 1966, there are new changes and it gets familiar name today Glavatartsi.

Until the early 60s Glavatartsi was well developed village. According to the census of 1956 there are 50 households, 41 buildings and 298 inhabitants. For this helps its proximity to the village Iglovryh, just 2km down on the shore of the Arda River, home to the town hall, school, post office and shops. During the period 1957-1963 was started the construction of the dam of Kardzhali. Now, when the water level in the lake has dropped too, can be seen the remains of rural buildings.

The dam not only change the landscape of the area, but also people’s lives. The lack of a central nearby village leads many young people to move to increased Enchets village or in the city of Kardzhali, where there are better living conditions. The population is aging. The main livelihood is livestock farming and tobacco. The houses are built in the typical style for this end-of stone and adobe bricks and roof -with stone / tile /. Today the old look of the village was replaced by new modern buildings. Meager remains of only a ruined house and parched fountain underneath, remind of past village Glavatartsi.

Beginning of the new construction in the village began with construction of cottage Forestry Kardzhali in 1984, when in the vicinity actively afforested slopes. The place is attractive with its beauty and tranquility, and soon appear several more houses of families from the nearby town of Kardzhali. In the period from 1989 to 1994 village almost depopulated. But soon, the land began quickly to buy, appear first hotels and guest houses and is born a new life, especially during the summer months.

Glavatartsi village is already quite a popular destination for tourism. Anyone staying in accommodation facilities in the village finds Glavatartsi is a wonderful place to relax for a short stop for tourists decided to visit historical and natural attractions in the region or for banquets on various occasions.